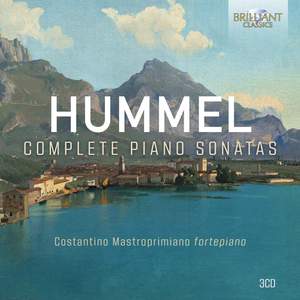 The pianist talks to David about his recently-completed set of sonatas by the great Central European composer.

The first complete recording of the Hummel piano sonatas on fortepiano!

The name of Hummel usually is related to two other musical giants of his period: Mozart and Beethoven. Hummel was a pupil of the former and a rival of the later, both being piano virtuosos in Vienna.

Hummel’s piano style is influenced by Mozart in its adherence to the Classical Viennese Style and the grace and charm of his melodies. Beethoven’s influence is seen in the dramatic and sometimes stormy character of his music, whereas Hummel himself invented and developed his own personal pianism of unprecedented virtuosity and brilliance, which had great influence on piano composers after him (Chopin, Liszt and Schumann).