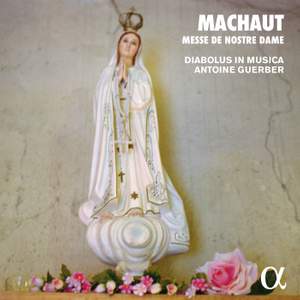 Guillaume de Machaut was born around 1300 in the environs of Reims, which at that time was a flourishing royal city with a population of almost 20,000, famous throughout Europe for its textile workshops and trade fairs. Like most cathedrals of Western Europe, Reims is built on the site of an earlier edifice. The Rouelle altar, on the left in the nave, adjacent to the choir screen, was dedicated to the Holy Spirit. But in 1343 a magnificent statue of the Virgin Mary was placed there. In 1341 Archbishop Jean de Vienne established a plainchant Votive Mass for the Virgin, to be performed each week before the Rouelle altar. The Marian Mass was introduced by Guillaume de Machaut and his younger brother Jean as a perpetuation of the archbishop’s wish, and it was for that particular liturgy, which was sung every Saturday throughout the year, that Guillaume wrote his famous polyphonic mass. The Messe de Nostre Dame, as it is called in only one of the five surviving manuscripts, is the first complete preserved polyphonic mass known to be by a single hand. It includes the five movements of the Ordinary plus the four-voice Ite missa est. The Mass is not strictly speaking a unified cycle, but there is nevertheless great coherence in its rhythmic and harmonic languages. The succession of movements shows a broad construction and a harmonious and carefully established stylistic progression, from the Kyrie with its strong harmonic structure to the Agnus Dei with its melodic lyricism.