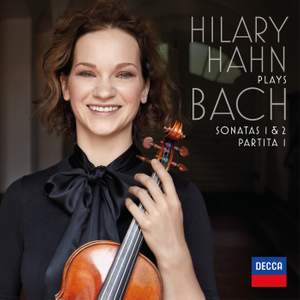 This is quite simply magnificent violin-playing, the sort that while you’re listening to it convinces you that the music couldn’t possibly be played any other way…you soon realise just how far... — Gramophone Magazine, November 2018 More…

The American violinist talks to Katherine about returning to Bach's solo sonatas and partitas two decades after her debut recording aged 16.

Hilary Hahn burst onto the classical scene in 1997 with her debut album ‘Hilary Hahn plays Bach’.

Hilary has since enjoyed an incredibly successful international career and is considered one of the world’s finest violinists, winning 3 Grammy awards amongst other honours.

Hilary is a strong advocate for classical music, leading projects like the specially commissioned ‘In 27 Pieces: The Hilary Hahn Encores’ collection of new compositions and her inspiring #100daysofpractice campaign on Instagram.

This is quite simply magnificent violin-playing, the sort that while you’re listening to it convinces you that the music couldn’t possibly be played any other way…you soon realise just how far she’s come since her teenage years, the tempo marginally more mobile and the variety of nuance and tone on offer so much wider than it had been...I adored it.

Thanks to her conviction, technique and deep understanding of Bach, Hahn has that rare ability of convincing the listener that this music couldn’t possibly be played in any other way...After two weeks in its company, I implore you to listen to something from this recording every day: it will feed your mind as well as your soul. This is 75 minutes of authentic and profound Bach playing of the highest standard.

It’s incendiary and thrilling stuff, created by someone who has lived with Bach so regularly and deeply that his music seems part of her very being...At the same time, nothing is done for show. Technique, feelings, heart and mind — every element is intuitively fused, as Bach always demands. Hahn’s greatest, most dazzling mature achievement mirrors Bach’s own: effortlessly conjuring the appearance of voices in counterpoint from single notes, abrupt changes in register and miraculous, spreadeagled chords.