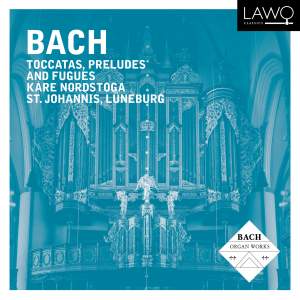 Superbly recorded and faithful to both clarity and the large acoustics, this organ sings, even in the plenos with maybe 20 ranks of mixture work! Kåre Nordstoga is a fine player with a natural... — Choir & Organ, January 2019, More…

On his ninth and tenth of a total of fourteen CDs of Bach's collected organ works, Kåre Nordstoga pulls together much of what was not collected from the composer's side - preludes and fugues.

The double form prelude (or toccata) and fugue has been an established form of composition since the 1600s. The North Germans Dietrich Buxtehude and Georg Böhm made a powerful contribution to this contrastive style in which the freer first part and the more rigorous second part are united in a dynamic whole.

The young Johann Sebastian harvested significant impressions from these two composers during his time in Lübeck and Lüneburg, and this album was recorded in Lüneburg.

As cathedral organist at Oslo Cathedral, Nordstoga frequently performs a large repertoire, which has included two popular concert series with Bach's complete organ works. His recordings include the organ music of Bach, Brahms, Franck, Widor, and Liszt, all of Bach's violin sonatas recorded on the cathedral's chancel organ in collaboration with violinist Geir Inge Lotsberg, as well as several recordings of Norwegian organ music.

Superbly recorded and faithful to both clarity and the large acoustics, this organ sings, even in the plenos with maybe 20 ranks of mixture work! Kåre Nordstoga is a fine player with a natural feeling for tempo and articulation to match the acoustics, and an excellent sense of style; these are very fine performances. The programme for each disc is divided by a chorale partita, allowing Nordstoga to use many of the lovely quieter registers not heard in the large works. An ideal match of music, organ and performer. Highly recommended.