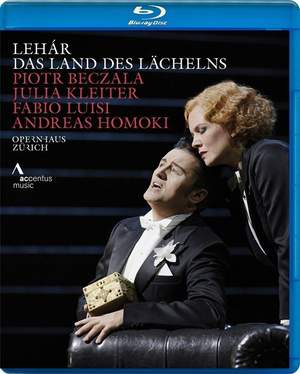 This is a magnificent achievement: a staging that lets the piece speak eloquently for itself, performed with a sense of style that’s faithful without being patronising…Kleiter’s singing has a... — Gramophone Magazine, October 2018 More…

Always smile and always be cheerful, always satisfied, no matter what happens, smile in spite of your sorrows and a thousand aches and pains', sings Prince Sou-Chong, thus introducing the fundamentally melancholic tone of Das Land des Lächelns ('The Land of Smiles'), which even has a tragic ending in store. For the new production of this operetta, world class tenor Piotr Beczala returned to the Opernhaus Zürich as Sou-Chong. He has an equal partner in Julia Kleiter, who plays the role of Lisa. Fabio Luisi and Andreas Homoki also know that the genre of operetta requires particular care – which is why they assumed personal responsibility for this production. Homoki sets the plot in a Paris Variété theater from the 1920s, complete with show staircase and heavy curtains. To emphasize the operatic elements, he condensed the piece, cutting several secondary roles and shortening dialogues. Recorded at the Opernhaus Zürich in June 2017.

This is a magnificent achievement: a staging that lets the piece speak eloquently for itself, performed with a sense of style that’s faithful without being patronising…Kleiter’s singing has a really glamorous gleam throughout; together with Beczała the pair articulate their emotional conflict as painfully and as persuasively as if they’re singing Puccini...Of course, much credit has to go to Fabio Luisi, who brings out textures ranging from Straussian lushness to Ravel-like chinoiserie.