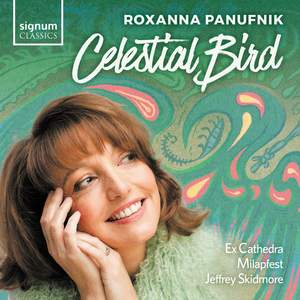 Panufnik, R: Since We Parted

David talks to composer Roxanna Panufnik about her forthcoming collection of eclectic vocal works performed by Ex Cathedra and Milapfest under Jeffrey Skidmore.

One of the UK’s most lauded composers, Roxanna Panufnik celebrates her 50th birthday with a new release of her previously unrecorded choral music, performed by leading British choir Ex Cathedra under Jeffrey Skidmore. Known for her interest in world music, the programme includes performances from Indian arts organisation Milapfest on Unending Love, as well as a recording of Child of Heaven: Dawn Chorus III – a new commission from Ex Cathedra that sets a Hymn to Dawn from the Rig Veda.

Roxanna has written a wide range of pieces, which are regularly performed all over the world, including opera, ballet, music theatre, choral works, chamber compositions and music for film and television. This album follows the 2017 release of 99 Words (SIGCD519), combining works by Panufnik and Sir John Tavener.

Jeffrey Skidmore doesn’t attempt to reposition the voices for different material, which means that what could have been a shapelessly eclectic programme works in a very unified way, and confirms that underneath her diversity Panufnik has a very distinct and welcoming musical personality. Quite lovely throughout.

Her writing for voices is always fluent and idiomatic, so it is a pity that the two larger pieces here [Unending Love and Since We Parted] seem less than convincing…Modest in scope and intention, the remaining items are never less than enjoyable – not least the Magnificat and Nunc dimittis for St Pancras…Singing throughout is secure and committed, as has long been associated with Ex Cathedra, directed with his customary skill by Jeffrey Skidmore.