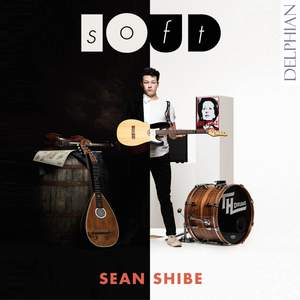 There’s no doubting that [Shibe] is an artist blessed with grace to spare, and a roar that is fearsome – witness the opening section of Julia Wolfe’s LAD which screams into anguished life before... — BBC Music Magazine, November 2018, 5 out of 5 stars More…

anon.: Ladie lie near me (from the Wemyss Manuscript)

anon.: A Scotts Tune, by Mr. Lesslie (from the Balcarres Manuscript)

anon.: Holi and Faire (from the Wemyss Manuscript)

anon.: A Scots Tune (from the Rowallan Manuscript)

Read our exclusive interview with Sean Shibe about the recording here.

The gentle beauty of Scottish lute manuscripts and of two short instrumental solos by James MacMillan is confronted by, and holds its own against, music by New York-based composers Julia Wolfe – a work of cathartic grief and anger originally scored for nine bagpipes – and David Lang, whose electric violin work Killer is iron-clad in its abrupt fury. Shibe has arranged all of this music himself, and presents it here alongside a breathtaking recording of Steve Reich's now classic Electric Counterpoint. 'Have we today forgotten how to speak with grace,' Shibe asks, 'or is the real danger that we aren't screaming loudly enough?'

There’s no doubting that [Shibe] is an artist blessed with grace to spare, and a roar that is fearsome – witness the opening section of Julia Wolfe’s LAD which screams into anguished life before cornering into lament, then frenzied catharsis…Like Julian Bream before him, Shibe has a natural yet creative rapport with 17th-century lute music…Both refract the music through a generous soundworld that demands you savour every note.

Shibe imbues the early Scottish lute pieces with a profoundly moving intensity that carries them far beyond their modest frames, through to the MacMillan arrangements, themselves as much transitions from the old to the new as Reich’s Electric Counterpoint, which seems to gather the previous works in a boppy afterparty.

I suspect his beautifully touched-in accounts of pieces from 17th-century Scottish manuscripts will get more living-room plays than Julia Wolfe’s LAD, an abrasive electric-guitar scream originally conceived for nine bagpipes. In between, he also supplies a definitive performance of Steve Reich’s Electric Counterpoint.

Entirely deserving of the attention and awards it has begun to receive, softLOUD is something you’ll want to listen to in two halves, as well as straight through. It’s absolutely riveting. It’s the most eloquent musical scream on record. In terms of an artistic manifesto, it asks more questions than it provides answers. But I’d be willing to wager that each time you get to the end, you’ll have turned it up to eleven.