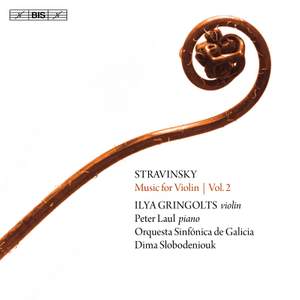 The performances are perfectly poised, the recording faultless. — BBC Music Magazine, August 2018, 4 out of 5 stars/5 out of 5 stars More…

The relationship between Igor Stravinsky and the violin didn't get off to a promising start: early on in his career the composer stated that he was not fond of stringed instruments, finding them ‘rich in cheap expressivity’. He was also suspicious of virtuoso interpreters – among which violinists were particularly numerous – and their tendency to ‘seek immediate triumphs and to lend themselves to the wishes of the public’. Nevertheless there are in Stravinsky's oeuvre a number of works featuring a solo violin, all of which have now been recorded by his compatriot Ilya Gringolts.

The focus of the preceding volume was on the works for violin and piano, most of them Stravinsky's arrangements of his own music for the stage, and Gringolts and pianist Peter Laul were praised for their performances, for instance in Fanfare: ‘The Russian duo has discovered – and created – new freshness in the sound of Stravinsky's music for the instrument. Urgently recommended.’ On the present disc, Gringolts combines duos – again in the company of Laul – with other genres, including Stravinsky's most famous work for the violin: his Violin Concerto from 1931. In the concerto, as in the extract for solo violin and strings from the ballet Apollon musagète, Gringolts is supported by Orquesta Sinfónica de Galicia conducted by Dima Slobodeniouk.

The performances are perfectly poised, the recording faultless.

In the opening Toccata of the Violin Concerto, Gringolts displays wit and even a sense of rhythmic freedom despite the clockwork discipline of Stravinsky’s writing. In the first Aria he has splendid quirky repartee with the excellent orchestral players and in the second produced gentle, fluid melismas.