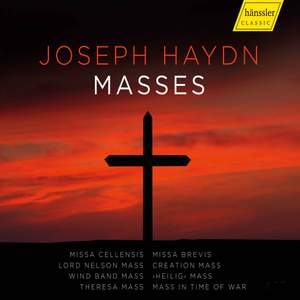 As might be expected, Rilling’s interpretative values represent a solidly middle-of-the-road view of Haydn. He may not use period instruments, but the choirs don’t sound generous in size, and... — Choir & Organ, January 2019, 4 out of 5 stars More…

Austrian classical composer Joseph Haydn was instrumental in his contributions to musical form. He earned the epithets “Father of the Symphony” and “Father of the String Quartet,” but also contributed many works to the genre of the Mass. On this release, eight of his masses have been gathered. Some of these works he wrote for the Esterhazy family, for whom he served as Kapellmeister and court composer. This release begins with the Missa Cellensis in honorem Beatissimae Virginis Mariae, which was written in 1766 after Haydn was promoted to Kapellmeister at Esterhaza. The mass is dedicated to the pilgrimage cult of Mariazell, Styria. Rounding out the release is one of Haydn’s most popular masses, his Missa in tempore belli, or Mass in time of war. The work is also known as the Kettle Bell mass for its dramatic use of timpani. He composed the work in August 1796 when Austria was mobilizing into war. Reflecting the troubled mood of this time, Haydn integrated references to battle in the Benedictus and Agnus Dei movements. Artists on this work include the Gachinger Kantorei Stuttgart, Bach-Collegium Stuttgart, Oregon Bach Festival Orchestra, and more.

As might be expected, Rilling’s interpretative values represent a solidly middle-of-the-road view of Haydn. He may not use period instruments, but the choirs don’t sound generous in size, and instrumental and vocal phrasing is always stylish. Tempi are consistently well judged, never extreme nor exaggerated.