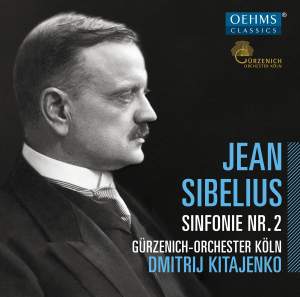 Kitajenko takes his time to admire the scenery it is too, but his dawdling pace may well test the patience of some. — BBC Music Magazine, August 2018, More…

No. 2, Våren (Version for Orchestra)

The influential critic Karl Flodin commented after the première of Sibelius’ Second Symphony, 'A symphonic poem the like of Sibelius’ Second Symphony has never been heard before, it’s something rarely heard in the genre of modern symphony. The more you listen to this brilliant work, the more powerful its contours seem, the deeper its soul appears and the more striking become the clues which hint at an understanding of this composition'. Oehms Classics has found the perfect partners for this recording in Dmitrij Kitajenko and the Gürzenich Orchestra Cologne, whom have paired it delightfully with two short pieces by Edvard Grieg.

Kitajenko takes his time to admire the scenery it is too, but his dawdling pace may well test the patience of some.

In Sibelius’ Second Symphony Dmitrij Kitajenko comes closer to the spirit of the score than a lot of other conductors, and his performance is one the most atmospheric and gripping available on disc. With extremely rich and differentiated textures, it breathes with stunning immediacy and impact. The playing of the Gürzenich Orchestra is superlative throughout.