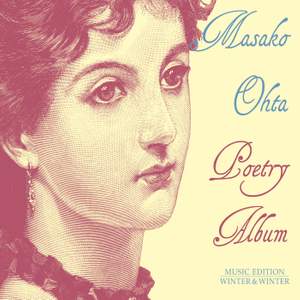 No. 1, Intermezzo in B Minor

I. Slowly, Sadly and as If to Converse With

II. Quietly and with a Cruel Reverberation

III. A Song of Love

One of the most famous pieces in the piano literature is Ludwig van Beethoven’s Fur Elise. But what if originally the work was called “For Therese?” Every work of music is in some way relational, and since Beethoven, when he was 40, fell in love with 19-year-old Therese Malfatti, it seems logical. Similarly, Johann Sebastian Bach dedicated the “Prelude and Fugue in C Major” to his deep love Anna Magdalena. This musical journey takes us on a journey through time to explore these and similar relationships. Japanese pianist Masako Ohta devotes herself to classical and contemporary classical music. She studied piani at the Toho Gakuen School of Music, the University of the Arts Berlin, and with Gyorgy Sebok, Andras Schiff, and Gyorgy Kurtag. She compiled the musical declarations of love for this album alongside producer Stefan Winter.