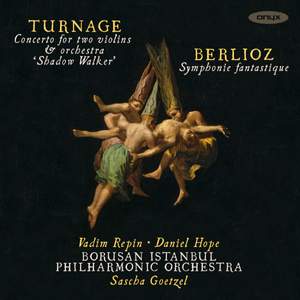 Vadim Repin and Daniel Hope are, not surprisingly, ideally fluent, and the excellent Turkish players recreate Turnage’s enigmatic soundworld with aplomb. This is an uncompromising score, but... — BBC Music Magazine, August 2018, 4 out of 5 stars More…

Recorded live in Vienna’s Musikverein, this album captures a special evening which saw the new concerto for 2 violins & orchestra ‘Shadow Walker’ by Mark Anthony Turnage performed by Vadim Repin and Daniel Hope with the Borusan Istanbul Philharmonic under Sascha Goetzel. The second half of the concert was an electrifying Symphony fantastique. "I've been drawn to compose double concertos before, such as Dispelling the Fears for two trumpets, and in Shadow Walker I've again been intrigued by the possibilities of interplay between the two soloists. The idea of shadowing can take many musical forms, such as through canonic writing and the imitation of intervals, though I haven't gone as far as composing a fugue. The string sound of Vadim Repin and Daniel Hope should blend particularly well, almost like two aspects of the same identity. There isn't a strict hierarchical relationship with one violin the shadow of the other - it is much more equal and fluid’ Mark Anthony Turnage.

Vadim Repin and Daniel Hope are, not surprisingly, ideally fluent, and the excellent Turkish players recreate Turnage’s enigmatic soundworld with aplomb. This is an uncompromising score, but it’s a compelling concept that repays concentrated listening…[In the Berlioz] again the orchestra and Viennese conductor Sascha Goetzel leap to the occasion with characteristic vitality and freshness that’s exactly right for this youthful storm of passions.

Turnage hasn’t made things easy for himself; the two soloists are so tightly bound that the orchestra can feel in danger of being frozen out. Shadow Walker comes good courtesy of Turnage’s solving of that problem even more than by his exploration of dual identity in his Siamese-twin soloists…Goetzel’s [Berlioz] is live, alive and uses the orchestra’s roots and characteristics to its advantage (there is a fizz in the string body and a depth that’s more earthy than aristocratic). He also deploys his own trademark ability to whip up an atmosphere while enacting discipline.

I was initially caught off-guard by the understated elegance of Borusan Berlioz – the first three movements are urbane, almost courtly, but once we start hurtling towards the Scaffold it’s a different story. (This has to be one of the most terrifying, psychedelic Witches’ Sabbaths on record). Turnage’s double concerto is similarly eerie and unsettling, particularly the Shostakovichesque final movement.