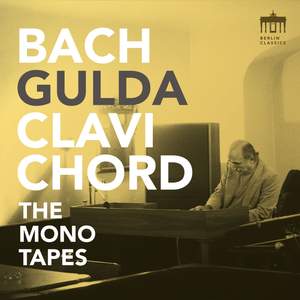 To whatever extent Gulda’s experience with the clavichord may have informed his piano-playing, he plays the clavichord like a pianist…That said, there is a certain dazzling virtuosity in these... — Gramophone Magazine, September 2018 More…

Gulda plays Bach at the clavichord. It sounds so simple, and yet it holds a wealth of musical depth and expression. In about 1978, the famous pianist Friedrich Gulda recorded his clavichord playing on various different occasions: at intimate concerts or during his morning practice, when he buried himself in the music as if at a séance – and from the unique combination of brilliant musician, eloquent instrument and eminent composer grew something quite special.

The clavichord retreated into the shadows after its period of greatest prominence in the early 18th century. Its simple construction, in which depressing a key set the strings in vibration by means of a small metal blade called a tangent, generated a unique sound. Friedrich Gulda was one of the most important pianists to engage with the instrument in the course of the early-music revival. Apart from the organ, it was the favourite instrument of Johann Sebastian Bach, who wrote many of his works at it and for it.

Originally recorded only to check on his own playing, the tapes were later made at various places and in different situations: in a small concert hall, a hotel room or at Gulda’s artistic retreat in Weissenbach am Attersee. His pupil Thomas Knapp was astonished when his teacher offered him the tapes one day, asking “Would you like ’em?” And who would have refused them? The elementary recording technique and the poor condition of the now 40-year-old tapes called for exhaustive restoration, followed by digital conversion. True, these professionally remastered recordings are not distinguished by exceptional sound quality, but they are invaluable as a surprisingly intimate testimony to a charismatic musician.

To whatever extent Gulda’s experience with the clavichord may have informed his piano-playing, he plays the clavichord like a pianist…That said, there is a certain dazzling virtuosity in these performances. One must admire Gulda’s clarity of thought and sheer facility…It’s difficult to imagine listeners returning to these as they might to other beloved Bach interpretations but they are nevertheless sui generis, thoroughly considered and certainly provide food for thought.