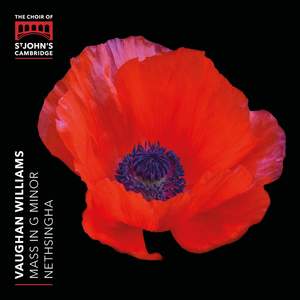 Some performances grip you from the outset, and this St John’s College recording of Vaughan Williams’s Mass in G minor is one of them. The Kyrie’s rapt inwardness is built on the outstandingly... — BBC Music Magazine, July 2018, 5 out of 5 stars More…

Vaughan Williams: Prayer to the Father of Heaven

Andrew Nethsingha and The Choir of St John’s College, Cambridge mark the centenary of the 1918 Armistice with a new recording of choral works by Ralph Vaughan Williams. Many of the works were composed in the years immediately following the event, including O clap your hands, Lord, thou hast been our refuge and the Mass in G minor which leads the programme. Vaughan Williams turned his attention to liturgical music following his service as a wagon orderly during the Great War. Ursula Vaughan Williams, his second wife and biographer, wrote that such work ‘gave Ralph vivid awareness of how men died’. It is perhaps unsurprising that in many of the texts to which he turned after the 1918 Armistice, the fragility and weakness of humanity becomes a recurrent theme. Despite being described as a ‘confirmed atheist’ by the philosopher Bertrand Russell, his heightened exploration of Christian texts, symbols, and images after the War might rather be understood both as an attempt to grapple anew with what might lie, as he put it, ‘beyond sense and knowledge’, and to search for consolation in religious and other inherited traditions amid a world irrevocably changed.The fifth release in their series with Signum, the Choir of St John’s have received glowing praise for their previous releases, culminating in the choral prize at the 2017 BBC Music Magazine Awards for their debut release of works by Jonathan Harvey (Deo SIGCD456).

Some performances grip you from the outset, and this St John’s College recording of Vaughan Williams’s Mass in G minor is one of them. The Kyrie’s rapt inwardness is built on the outstandingly assured vocalism of the singers at restrained dynamic levels, but also on conductor Andrew Nethsingha’s pleasingly fluid moulding of the undulating motifs Vaughan Williams uses to knit the music together.

Clean lines, rounded tone and a near perfect balance of voices characterise this performance of Vaughan Williams’s 1922 Mass in G minor. It’s a fine achievement and alone worth the price of the CD. But the remainder of the programme is not insignificant: it comprises some of Vaughan Williams’s Anglican church music, including the celebrated coronation anthem O taste and see, the ‘Antiphon’ from the Five Mystical Songs and Lord, thou hast been our refuge. There’s also a fine rendering of the organ prelude on Rhosymedre. A wholly enjoyable CD that reinforces the significance of the agnostic Vaughan Williams’s sacred music.

Nethsingha shapes a performance [of the Mass] of profound dignity and power, beautifully sung by this always impressive choir.