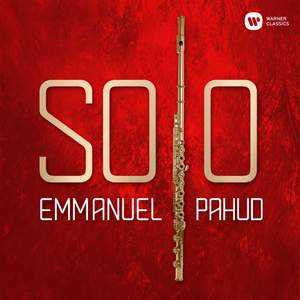 Pintscher: Beyond (a system of passing)

Berio: Sequenza I for flute

Interweaving the Baroque era and the 20th and 21st centuries, the newest addition to Emmanuel Pahud's Warner Classics catalogue is an imaginative 2-CD collection of music for unaccompanied flute. Among the composers are Telemann, Nielsen, Honegger, Varèse, Berio, Takemitsu, Pärt, Pintscher and Widmann. "Most of the pieces are about exploring new paths," says Pahud. "The power of this music often lies in the contrast between a simple line and the most refined complexities, between a note so quiet as to be barely perceptible and the loudest, most extreme notes playable on the instrument."

Taken at face value, the order and selection of works seems entirely random…However, the eccentric programme is carefully considered; repeated listening reveals new parallels between the pieces. It’s like eating a bag of pick ‘n’ mix where every sweet is deliciously interesting, and the aleatory element merely enhances the enjoyment…The flautist’s customary rounded sound is pristinely captured throughout this quirky collection.