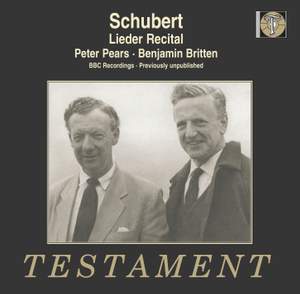 To my mind, these previously unreleased BBC broadcasts from the late 1950s and early ‘60s contain some of Pears’s most alluring singing on record: highlights include an elegant ‘Hark, hark the... — Katherine Cooper, Presto Music, May 2018 More…

Peter Pears and Benjamin Britten made up one of the great voice-and-piano duos, so to have a whole programme from them of Britten’s favourite composer, Schubert, is gold indeed. Although they recorded a fair amount of Schubert in the Decca studios, including a few of these songs, their BBC broadcasts show them in a slightly more unbuttoned mood. The two men got to know each other in 1937 through their work for the BBC – Pears was a member of the BBC Singers and Britten was regularly writing music for radio productions. A year later they began sharing a London flat and gradually they moved into the close relationship that would last until Britten’s death. This Schubert Lieder programme by Britten and Pears originated in three separate broadcasts for the BBC. They began their sequence on 4 February 1959 with a song from the last year of the composer’s life, Der Winterabend, D.938. The 15 November 1961 broadcast was launched with a difficult and strenuous song, Auflösung, D.807, to Johann Mayrhofer’s poem. Through their dramatic singing and playing, Pears and Britten achieve the intended ecstatic state. Like the great American baritone David Bispham on a famous 78rpm disc, Pears sings the delightful serenade ‘Hark, hark, the lark’ in Shakespeare’s original English – the poem comes from Cymbeline and Schubert made his setting, D.889, in 1826. For their 3 January 1964 broadcast, Pears and Britten were in quite an introspective mood, beginning with the immensely sad, resigned Ihr Grab, D.736, a Karl August Engelhardt setting probably from 1822.

To my mind, these previously unreleased BBC broadcasts from the late 1950s and early ‘60s contain some of Pears’s most alluring singing on record: highlights include an elegant ‘Hark, hark the Lark!’ (sung in English), a superbly dramatic Auflösung, and Pears’s assertive, virile Miller-Lad in a breakneck ‘Mein!’ from Die schöne Müllerin.