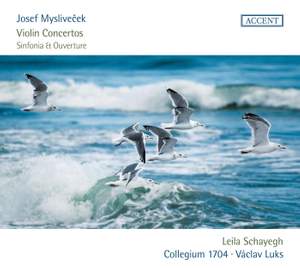 In each work the effect is of musical vitality bursting through precisely shaped traditional forms. Nothing here is new on disc…What makes this CD so admirable a Mysliveček display-case is the... — BBC Music Magazine, July 2018, 4 out of 5 stars More…

Myslivecek: Overture No. 2 in A Major

Myslivecek: Violin Concerto in A major

Josef Myslivecek (1737-1781) also known as Il Divino Boemo (The Divine Bohemian) was one of the most celebrated opera composers in Italy in the 1770s. His instrumental works - symphonies, concertos, octets, quartets, and trios - were as popular as his vocal music. Certain features of his melodic style reflect his Bohemian origins, and Myslivecek's influence on contemporaries was significant. A close friend of the young W. A. Mozart and a musical influence on him, Mozart described his character as "full of fire, spirit and life."

All nine of the Myslivecek violin concertos that survive in complete form were probably written in a short period during the late 1760s and early 1770s when the composer maintained close contacts with the city of Padua and the composer and violinist Giuseppe Tartini. As a representative of Italian traditions that extended back to the early eighteenth century, Myslivecek’s violin concertos are all cast in three movements of the pattern ‘fast-slow-fast’.

“From this music one can hear that the author was also a superb opera composer: the quickly alternating themes are well defined in character, whether sounding serious or boisterous, pleading or alluring, questioning or majestic, friendly or imperious. Figuratively, we find ourselves on the opera stage.” (Leila Schayegh)

In each work the effect is of musical vitality bursting through precisely shaped traditional forms. Nothing here is new on disc…What makes this CD so admirable a Mysliveček display-case is the near-ideal stylistic balance achieved by the expert Czech period band on its own and accompanying the fine-grained (if perhaps small-scale) virtuosity of the Swiss baroque violinist Leila Schyegh.

Collegium 1704 exhibit the sensitivity and vivacity that has characterised their Zelenka explorations, while Leila Schayegh’s focused, vibrato-lite tone is ideal for these concertos…The music is worthwhile above all for its composer’s craftsmanship and offers a glimpse of what sort of sound Mozart would have had in his head as he embarked upon his own youthful violin concertos.

Leila Schayegh is the superb soloist, pure and conjuring palpable magic in the first movement of the E major, while casting a spell in the slow movement. In fact, the slow movements are the true achievements, while the finale of the Concerto in A major is of particular, folkish delight. The dynamic E-flat symphony is full of life and superbly realised by Prague- based authentic instrument Collegium 1704. There is a cleanliness to this music that seeks parallel with the music of J. C. Bach, while the Ouverture No. 2 has a richer sound due to subdivided violas. Fascinating, and well recorded.