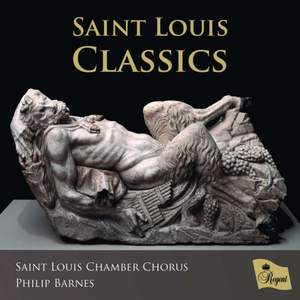 The Saint Louis Chamber Chorus has a proud tradition of commissioning new works many of which have featured on their previous CD releases on Regent, but much of its repertoire is drawn from the canon of unaccompanied choral music covering five centuries and more, this recording demonstrates how adept the singers are at performing a variety of musical styles and languages in a programme spanning several centuries and nationalities.

This new disc features works inspired by classical mythology, such as Bantock’s Invocation to Pan, and works that have become ‘classics’ in the field of choral music, such as Schoenberg’s Friede auf Erden - one of the greatest a capella choral masterpieces. This recording also features one of the Chorus’s recent commissions, Bob Chilcott’s Silver swan. This setting for a capella double choir of Orlando Gibbons and Catullus is a free re-working of Gibbons’s famous 17th-century madrigal. It retains the lilting depiction of the swan and the original composer's love of antiphonal effects and rich texture.