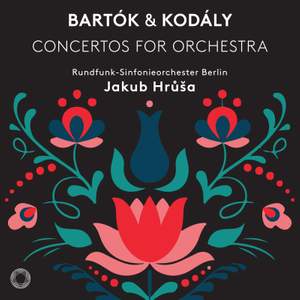 Hrůša takes a decidedly serious view of the Bartók, giving a finely judged account of its slow introduction, and in the ‘Elegy’ third movement eliciting some superbly atmospheric playing from... — BBC Music Magazine, August 2018, 4 out of 5 stars More…

Exuberant, colourful and edgy concertos for orchestra by Bartók and Kodály are brought together in spirited and vivid performances from the Berlin Radio Symphony Orchestra conducted by the podium sensation Jakub Hrůša on this PENTATONE release.

Bartók’s landmark Concerto for Orchestra is not only a thrilling orchestral tour de force; it’s also a striking and deeply expressive work which effortlessly assimilates Hungarian folk melodies and rhythms in its compelling and polished score. At times brooding and mysterious, it’s Bartók’s most popular and uplifting work, and it ends in a flurry of high spirits.

With its lush and vivid orchestration and a healthy rhythmic swagger, Kodály’s lesser-known Concerto for Orchestra is a captivating and buoyant work. Inspired by the Baroque concerto grosso but updated with a romantic sensibility, the result is a sure-footed, rousing and energetic showpiece for orchestra.

Hrůša takes a decidedly serious view of the Bartók, giving a finely judged account of its slow introduction, and in the ‘Elegy’ third movement eliciting some superbly atmospheric playing from the Berlin Radio Symphony orchestra. One may wish, though, that he would let his hair down a bit more elsewhere…but these are relatively small points, and the performance as a whole is impressive.

Predating Bartók’s famous Concerto for Orchestra by only a few years, Zoltán Kodály’s offering is a slighter but nonetheless superb piece, with its identifiably Hungarian harmonies and ecstatic climax. Jakub Hrůša, who has led the Philharmonia Orchestra in some notable live performances, clarifies the fuller textures with a razor-sharp ear.