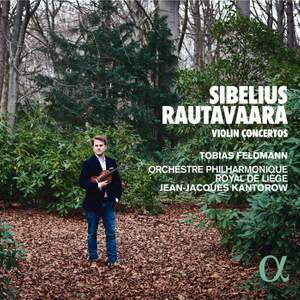 I love the parallels between these two Finnish concertos which Feldman and Kantarow draw out, from the especially ethereal treatment of the opening of the Sibelius (which anticipates the disembodied... — Katherine Cooper, Presto Classical, May 2018 More…

Following his Alpha recording of sonatas by Prokofiev, Ravel and Strauss, the violinist Tobias Feldmann now turns to the concerto form, performing the two major works of the Finnish repertoire for the instrument: the violin concertos of Jean Sibelius and Einojuhani Rautavaara. Premiered in Helsinki in 1904, the Sibelius Concerto proved to be exceptionally difficult technically for the soloist. Sibelius revised his score, but subsequently composed for violin and orchestra only in shorter forms, the serenade and the humoresque. It was not until nearly seventy years later that a Finnish composer wrote another large-scale work for violin and orchestra, with the Concerto of Rautavaara, which in all respects equals the degree of virtuosity demanded by the earlier work.

I love the parallels between these two Finnish concertos which Feldman and Kantarow draw out, from the especially ethereal treatment of the opening of the Sibelius (which anticipates the disembodied arctic soundscape at the beginning of the Rautavaara) to the very present timpani in the finale of Sibelius which mirrors the strange scherzo-like passage at the beginning of Rautavaara’s long second movement.

Rautavaara’s two-part work (1977) is a colourful late-tonal excursion inspired by his alma mater, Manhattan — obverse of the Finnish landscape. As in the Sibelius, cadenzas are integral, but the soloist is asked to improvise. The lustrous-toned Feldmann does so convincingly.