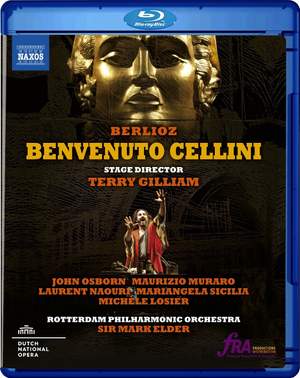 With his affinity for the 16th-century sculptor Benvenuto Cellini’s advocacy of artistic and personal freedom, Hector Berlioz went straight for the grand gesture with his first completed opera. Returning to it years after initial production debacles, Berlioz stated that he would ‘never again find such verve and Cellinian impetuosity, nor such a variety of ideas.’ The plot revolves around Cellini’s wooing of Teresa, a match frustrated at every opportunity by his rival, the cowardly Fieramosca. Benvenuto Cellini is a pithy work combining romance, excitement, violence, comedy and spectacle; the perfect stage for Terry Gilliam’s stylishly colorful and larger than life directing.