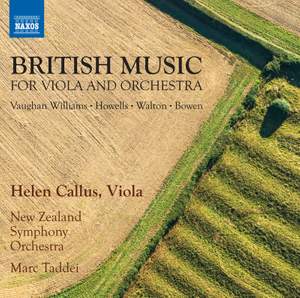 British Music for Viola and Orchestra

The ‘warm voice’ of the viola has long been associated with pioneering British performers such as Lionel Tertis, for whom Vaughan Williams wrote his tuneful and elegantly crafted ‘Suite.’ Tertis famously rejected the score of Walton’s ‘Viola Concerto,’ but instantly regretted his decision on hearing its lyrical warmth and piquant blend of delicacy and bite at the premiere performed by Paul Hindemith. Howells’s somber but noble ‘Elegy’ is a memorial for a student colleague killed in action during World War I. Hailed as “one of the world’s greatest violists” (American Record Guide), Helen Callus continues to captivate audiences with her lyrical tone, technical command, and profound artistry. She is a sought-after recitalist, chamber musician, and concerto soloists. She has performed with such world-class ensembles as the Tokyo and Juilliard String Quartets, the BBC Concert Orchestra, and delighted audiences across the world. She is an award-winning recording artist and her seven releases have been met with the highest critical acclaim.