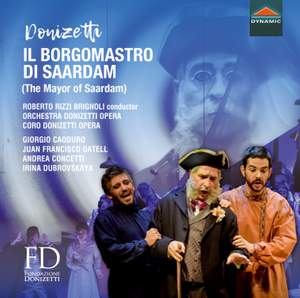 This production doesn’t feature any stars, but it is a thoroughly enjoyable and well-acted romp. — BBC Music Magazine, August 2018, 4 out of 5 stars More…

Having fallen into oblivion following performances in 1839, this attractive, rare opera buffa was revived in 1973 in the Dutch city of Zaanstad (the Saardam of the libretto). It's staged on this recording at Bergamo's Teatro Sociale as part of the Donizetti Festival in a new critical edition made for the Donizetti Foundation by Alberto Sonzogni. The plot opens with Tsar Peter the Great working incognito as a carpenter in Sardaam's shipyard to acquire technical knowledge which he will then take back home. The mayor is convinced of this secretive arrangement, which leads to endless misunderstandings. Conductor Roberto Rizzi Brignoli leads the orchestra of the Donizetti Opera; stage action is in the hands of internationally-renowned cinema director Davide Ferrario. Headed by the renowned bass Andrea Concetti, the cast comprises emerging stars in the belcanto repertoire, including Giorgio Caoduro, Juan Francisco Gatell, Irina Dubrovskaya and Aya Wakizono.

This production doesn’t feature any stars, but it is a thoroughly enjoyable and well-acted romp.

There are echoes here of Il barbiere di Siviglia, and there is much Rossini in the score, notably the comic ‘ensemble of perplexity’ that concludes the first act. The opera fizzes along under Roberto Rizzi Brignoli, the general frivolity offset by tender music for the lovers. There is one serious aria, ‘Va e la nave’...Giorgio Caoduro sings this magnificently, right down to the embellishments in the second stanza of the cabaletta.