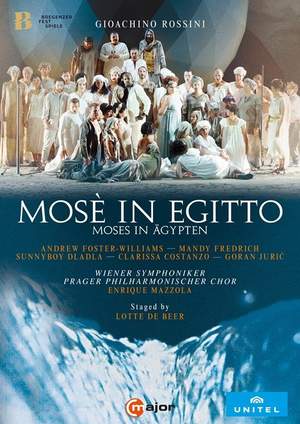 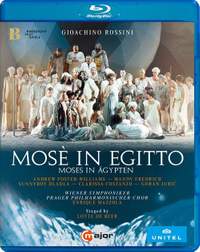 A rarely performed masterpiece, Gioachino Rossini's Mose in Egitto at the Bregenz Festival staged by Lotte de Beer, who retrieves this hidden gem of opera literature for a spectacular staging. De Beer, one of the most sought-after stage directors of her generation (International Opera Newcomer Award 2015) teams up with the Dutch theatre collective Hotel Modern to tell the story of the Biblical Exodus. Their unique production concept for Mose in Egitto revolves around the ingenuity of Hotel Modern. The theatre group conjures up its own reality by using live animations to portray the mass scenes and the parallel narratives of the people and the slaves. Miniature cameras, thousands of puppets, models of villages and cities and a spectacular aquarium installation present the biblical tale of plagues and the parting of the Red Sea on the Bregenz stage – 'a stroke of genius' (Der Standard).

As Osiride, Sunnyboy Dladla is a useful bel canto tenor…and Andrew Foster-Williams is a stern voiced Pharoah. Best of all is the young Italian soprano, Clarissa Costanzo, who rightly stops the show in Act II with ‘Porgi la destra amata’. That’s where the magic and theatre is.

From the point of view of stagecraft, it’s all extremely cleverly done, though not everyone will go along with it…Sunnyboy Dladla’s flexible tenor offers bright tone and a definite emotional charge, with Mandy Fredrich’s fluent and liquid soprano summoning dramatic conviction as his mother, Amaltea…Drawing clean singing from the Prague Philharmonic Choir and diligent playing from the Vienna Symphony Orchestra, Enrique Mazzola keeps a firm and stylish hand on this musical tiller.