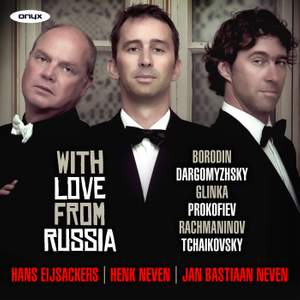 With Love from Russia

Sensitive cello playing throughout. The recording could be a little cleaner. — BBC Music Magazine, August 2018, 3 out of 5 stars

Glinka: Gde nasha Roza (Where is our Rose)?

Glinka: Do Not Tempt Me Needlessly

The merchant’s dream (Arr. for cello & piano by Roman Sapozhnikov)

Dargomïzhsky: The Youth and the Maiden

Borodin: The Pretty Girl No Longer Loves Me

The sad merchant (Arr. for cello & piano by Roman Sapozhnikov)

A wonderful survey of Russian song, in new arrangements. Baritone Henk Neven is joined once again by his regular accompanist Hans Eijsackers and also by his cellist brother Jan Bastiaan Neven. Ranging from Glinka in the early 19th century to Rachmaninov in the 20th century via Borodin, Dargomyzhsky and Tchaikovsky, the programme also features a selection from Prokofiev’s ‘Chout’ in arrangements for cello & piano. A wonderfully intimate sound world is conjured by the musicians in this recital of well known and less well known songs – with love from Russia.

Sensitive cello playing throughout. The recording could be a little cleaner.