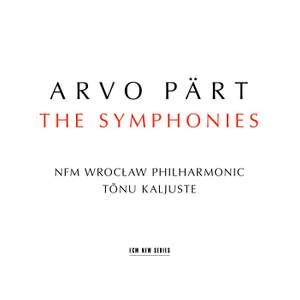 The NFM Wrocław Philharmonic, led by Tōnu Kaljuste, propel [the First Symphony] onward, drawing a shape from the swirling sonic mass…The Fourth (2008) owes as much to silence as it does to sound... — BBC Music Magazine, August 2018, 4 out of 5 stars More…

All four of Arvo Part’s symphonies are released on a single disc for the first time, newly recorded with the NFM Wroclaw Philharmonic under the direction of one of Part’s most trusted colleagues, Tonu Kaljuste. Each of the symphonies, as the great Estonian composer has noted, is a world unto itself. Heard in chronological order they also tell us much about Part’s musical and spiritual journey, and the very different ways in which he has exercised his craft. Forty-five years separate his Symphony No. 1 (“Polyphonic”) written in 1963 while he was still a student of Heino Eller, from his Symphony No. 4 (“Los Angeles”) written in 2008, by which time he was (and still is) the world’s most widely-performed contemporary composer, and one whose now famous “tintinnabuli-style” has become an immediately identifiable artistic signature.

In presenting the works together, Tonu Kaljuste considers them as “if they were a single grand symphony. I perceive Arvo Part’s creations as a biographical narrative, and hope that with the sound of the entirety of the music on this album we can refresh our memory of Part’s journey. It began with an entry into the neo-classical and serialist world, moved on with a composition that incorporated the use of collage, continued under the influence of early sacred music and - with the fourth symphony - arrived at a confession-like music, with a sound world supported by prayer, penitence and suffering.”

The NFM Wrocław Philharmonic, led by Tōnu Kaljuste, propel [the First Symphony] onward, drawing a shape from the swirling sonic mass…The Fourth (2008) owes as much to silence as it does to sound – a reality neatly observed by Kaljuste.

‘Symphonist’ is not a description often applied to Arvo Pärt. Yet the Four works contained on this disc…form important landmarks along a journey that is revealed to be neither straightforward nor easy…the fourth’s large-scale architectural dimensions are perfectly shaped and proportioned in the NFM Wrocław Philharmonic’s performance under Tonu Kaljuste.

Some 45 years separate Arvo Pärt’s first and fourth symphonies; and a world separates them in terms of expression. The Wrocław orchestra traverses both languages with supreme confidence, caught in a demonstration standard recording. ...the second symphony (1966), like the first, is fundamentally dodecaphonic, but quotes a Tchaikovsky piano piece towards the end to powerful effect. The third symphony (1971) is a transitional work, far more tonal and Church-Slavonic influenced. The more recent fourth symphony, Los Angeles (2008), speaks in a concentrated, profound and interior manner, beautifully presented.

For many years the Estonian conductor Tönu Kaljuste has been one of the most prolific and substantial interpreters of Arvo Pärt’s musical cosmos. His sublime and differentiated reading of the four Symphonies not only presents a journey through different compositional styles, such as neo-classical, serialist, gregorian-chant or church-slavonic-influenced and traditional, but also a deep understanding of the composer’s spiritual quest.