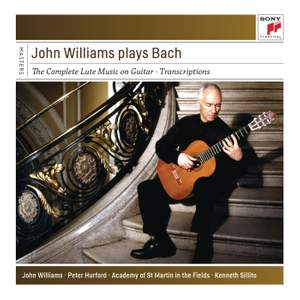 The Australian guitarist John Williams has long been universally recognized as a true master , to quote the Guardian. The centrepiece of Sony s new reissue of his Bach recordings is formed by the Suites for solo lute. Also contained on these 4 CDs are Williams s inspired transcriptions of the E major Violin Concerto (with the English Chamber Orchestra), preludes and fugues, chorales and movements from various suites. John Williams is a superb technician, wrote MusicWeb International, and justifiably deserves the accolades heaped on him during his long career. His rendition of these works is most authoritative and executed with admirable fluidity.