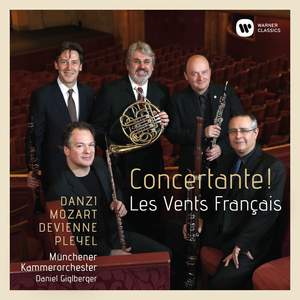 Mozart’s work itself is naturally the finest of all, notwithstanding doubts as to its authorship. It gets a performance as fine as any you’re likely to hear…The Munich Chamber Orchestra provide... — Gramophone Magazine, July 2018 More…

The members of Les Vents Français, which has been described as "the wind-quintet equivalent of a supergroup" join the Munich Chamber Orchestra and conductor Daniel Giglberger in five examples of the sinfonia concertante. The form flourished in the decades around 1800, particularly in Paris and Mannheim, and the works here are by Parisian luminaries Pleyel and Devienne, Mannheim resident Danzi, and a genius who visited Paris and took inspiration from the music of Mannheim: Wolfgang Amadeus Mozart.

Mozart’s work itself is naturally the finest of all, notwithstanding doubts as to its authorship. It gets a performance as fine as any you’re likely to hear…The Munich Chamber Orchestra provide attentive accompaniment but it is the performance by this unparalleled group of soloists that mark out this exquisite pair of discs.

Buy this for the glorious account of Mozart’s apotheosis of the genre: it’s chock-full of inspired little touches, such as dashes of rubato, quirky ornamentation and call-and-echo effects that play up the music’s joie de vivre, and clarinettist Paul Meyer shines especially brightly with marvellously flamboyant solos in the finale.

If Danzi’s melodic gifts are dwarfed by Mozart, his pieces remain fresh and appealing. The Munich orchestra’s accompaniments are texturally and rhythmically expert. The Mozart comes up against the classic Karajan/Philharmonia version with its unbeatable line-up. This modern version offers solos as fresh as a daisy; in terms of sheer joy it is Karajan 2.0. Soloists of the calibre of Radovan Vlatković and Emmanuel Pahud ensure excellence throughout.