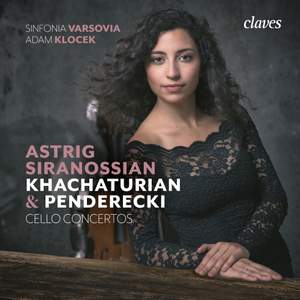 First performed on 30th October 1946 in the Great Hall of the Moscow Conservatory in the very midst of the Soviet turmoil, the Cello Concerto was the last of a series of three concertos, such as those for violin or piano, to be presented with Sviatoslav Knouchevitski (dedicatee) on the cello and Aleksandr Gauk conducting. Though first performed in 1946, it was written many years earlier while the composer was studying cello at the Gnessin Institute. The “Stalin Prize” (1941) for his First Violin Concerto (that contributed to his international fame) as well as his Third Symphony, first performed in 1947 for the thirtieth anniversary of the October Revolution, did not prevent him, following the 1948 Zhdanov Decree, to be accused - as were Prokofiev and Shostakovich - of writing hermetic, formalist music with misunderstood dissonances. Being barred from the Union of Soviet Composers left a strong mark on the three friends.

The Cello Concerto in E minor is a reflexion of Khachaturian’s early love of the opera. Often described as a “Symphonie Concertante”, it features the rhythmic, melodic, virtuoso and popular aspects of music of the period. The long cadenza of the first movement precedes the “Sonata-Fantasia” for cello solo by Khachaturian published in 1974 and includes several Caucasian themes that are closely related to the history of his family.

In 1962 he wrote, in collaboration with Mstislav Rostropovich, a Concerto Rhapsody in a less lyrical language, opening the way for a more avant-garde style of writing for the cello which is undeniably found in Penderecki’s Second Concerto.

First performed in 1982 by Mstislav Rostropovich, Penderecki’s Second Concerto for Cello and Orchestra is composed in one single movement: its architectural vision - in an arch style, including several cadenzas for the solo instrument - maintains a dramatic atmosphere throughout the work. The composer, having been a forerunner in the use of classical instruments as percussion in serial writing in the 60s, returned however to a post-romantic language in the 80s. As in several of these cello pieces, Penderecki builds on the heritage of the percussive use of this instrument (his First Cello Concerto created in 1972 is a perfect example of this) and heralds a new period inspired by his liking for sacred music.

Rather like Khachaturian but in a more avant-garde language, the idea of dramatisation is very present in this Second Cello Concerto. The use of clusters, glissandi, rests, masses of sound and immersion of extremely tonal passages create a stage set for this work. Indeed it is no wonder that Penderecki’s music was used in many films such as “The Exorcist” by William Peter Blatty in 1973, Stanley Kubrick’s “The Shining” in 1980, or Martin Scorsese’s “Shutter Island” in 2010. With these two works, Khachaturian and Penderecki offer a most complete vision of the use of the cello as solo instrument, supported by very dense orchestration.