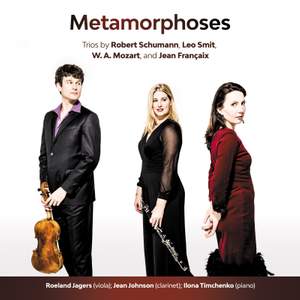 Metamorphoses is a new trio (clarinet/viola/piano) made up of world class musicians from the US, the Netherlands and Russia. The trio members have established themselves individually as soloists and chamber musicians in the world’s most prestigious concert halls.

For their debut CD, Metamorphoses presents a varied, cosmopolitan program consisting of repertoire from five different countries. Once upon a time… is a cross-pollination of a wide range of sounds, colors and music styles – just as the group itself is an inspiring exchange between musicians from three different countries and cultures. A musical statement of mutual understanding, behind which we stand wholeheartedly, especially in these times of uncertainty and division in the world.

Mozart’s beautiful Kegelstatt Trio is one of the earliest existing works for the unusual combination of clarinet, viola and piano. Robert Schumann, the composer of Märchenerzählungen (Fairy Tales) was inspired by Mozart’s work. In these relatively seldom played works, both composers explore the beautiful combination of timbres of the clarinet and the viola, instruments which share a similar range of pitches. Leo Smit was a Dutch Jew who sadly was murdered in 1943 in the concentration camp Sobibor. Smit, who lived for some years in Paris, had a strong affinity with the French music of his time, and that influence is clearly audible in his Trio. From France one can’t leave out the devishly difficult and therefore rarely performed Trio of Jean Francaix. Prelude, Allegro & Pastorale for clarinet and viola by the English violist/composer Rebecca Clarke is the musical icing on the cake.

The opportunity to share their work in this way will allow the trio to continue developing, both as individuals and a group, using feedback from peers, reviewers and audiences. In sharing their skills and passion for underplayed composers such as Rebecca Clarke and works such as the Trio of Jean Francaix via workshops with young people just starting their relationship with classical music, the trio hope to inspire a new generation of musicians to explore a range of works and instrumental combinations.