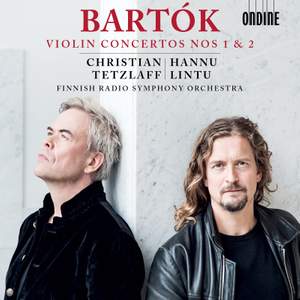 This is altogether a fine performance [of the Second Concerto], with Christian Tetzlaff a touch more rhythmically alert and characterful than Renaud Capuçon on his recent recording of these two... — BBC Music Magazine, August 2018, 5 out of 5 stars More…

Christian Tetzlaff is considered one of the world’s leading international violinists and maintains a most extensive performing schedule. Musical America named him ‘Instrumentalist of the Year’ in 2005 and his recording of the violin concertos by Mendelssohn and Schumann, released on Ondine in 2011 (ODE11952), received the ‘Preis der deutschen Schallplattenkritik’. Gramophone Magazine was choosing the recording of the Schumann Violin Sonatas with Lars Vogt (ODE12052) as ‘Disc of the Month’ in January 2014. In addition, in 2015 ICMA awarded Christian Tetzlaff as the ‘Artist of the Year’. His recordings on Ondine with Brahms’ Trios (ODE12712D) and Violin Concertos by Dvorák and Suk (1279-5) released in 2015 and 2016 earned GRAMMY nominations.

Recordings by the Finnish Radio Symphony Orchestra under Hannu Lintu on Ondine have gathered excellent reviews in the international press. Their most recent release with orchestral works and songs by Jean Sibelius (ODE12895) won an ICMA Award in January 2018. The same album was also Editor’s Choice in Gramophone Magazine and Orchestral Choice in the BBC Music Magazine.

This is altogether a fine performance [of the Second Concerto], with Christian Tetzlaff a touch more rhythmically alert and characterful than Renaud Capuçon on his recent recording of these two concertos with the LSO, fine as that is…[in the First Concerto] Tetzlaff again produces playing that’s warmly lyrical and dazzlingly virtuosic, by turns. With the Finnish Radio Symphony Orchestra under Hannu Lintu on top form, this is an easy recommendation.

Ondine’s new Bartók CD is an out-and-out winner...Tetzlaff’s account of the First Concerto elevates this work to a whole new level of musical excellence, so much so that I’m inclined to place his expertly recorded CD of the two concertos ahead of all rival versions. It’s that good!

Hannu Lintu’s Finnish Radio Symphony Orchestra, plays with snap and crackle and is recorded with a thrilling combination of proximity and perspective- there is plenty to enjoy here.

This release proves the excellence of violinist Christian Tetzlaff, conductor Hannu Lintu and the Finnish Radio Symphony Orchestra in the repertoire of the twentieth century. Together, they offer a masterful interpretation of Bartok’s violin concertos. Tetzlaff and his Finnish partners use their outstanding abilities and musical senses to expressively recreate the moods without neglecting structural refinement.