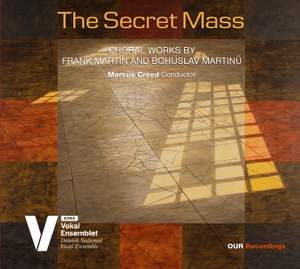 In both works, the Danish National Vocal Ensemble, directed by Marcus Creed, produces an excellently-integrated sound, although they might have been bolder in defining climatic phrases in the... — BBC Music Magazine, August 2018, 4 out of 5 stars More…

No. 3, Our Lady's Breakfast

No. 4, The Virgin Mary's Picture

Martin, F: Songs of Ariel from Shakespeare's ‘The Tempest'

No. 1, Come unto These Yellow Sands

No. 3, Before You Can Say Come and Go

No. 5, Where the Bee Sucks, There Suck I

Martinů: Romance of the Dandelions, H. 364

The centrepiece of this album is Martin's towering masterwork, the Mass for Double Choir. Originally completed in 1926, Martin did not allow the work to be performed until 1963. After its premiere he explained: 'I felt that a personal expression of religious belief should remain secret and hidden from public opinion.' Thankfully Martin decided to share his secret; his Mass has become one of the 20th century's most powerful works composed for a cappella choir. For Swiss-born Martin, his musical breakthrough came early in life when he heard a performance of Bach's St. Matthew Passion. His musical language draws on a wide variety of influences, including Renaissance polyphony, Hindemithian extended tonality and traces of Schoenberg's twelve-tone system, but above all, Bach. In contrast, the urbane, cosmopolitan Martinu was a stylistic butterfly, and a bit of a late bloomer. One can easily hear traces of impressionism and Stravinskian neoclassicism throughout his mature style, but in his finest moments, Martinu embraces the love of folklore that inspired his elder countryman, Leos Janacek.

In both works, the Danish National Vocal Ensemble, directed by Marcus Creed, produces an excellently-integrated sound, although they might have been bolder in defining climatic phrases in the longer movements…The choir’s Czech declamation could be more pointed, but overall the singers deliver performances that capture the restrained radiance of these lovely works.

[Martin] Marcus Creed and the Danish National Vocal Ensemble give an exemplary reading of this beautiful work, with a near-perfect balance between the voices and evenness of tone across the ensemble. Creed and his Danish forces are as adept in Martinu as they are in Martin. Their CD is an important release.

Martin’s wonderful Songs of Ariel are given a virtuoso rendition that brings out every nuance and are alone worth the price of the disc…The Four Songs of the Virgin Mary are works of tremendous subtlety, and beautifully sung: while they are peaks of the Czech choral repertoire, I do hope that performances by non-Czech choirs, especially of this standard, will bring these works into greater international circulation.

…this is one of the most enjoyable discs I have reviewed in some time. With exemplary performances and recorded sound, the SACD should be in the collection of anyone who cares about twentieth-century choral music.