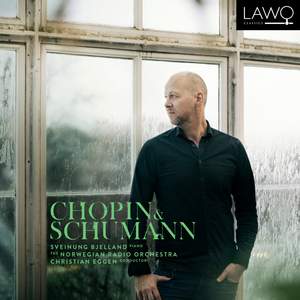 The award-winning pianist Sveinung Bjelland is from Stavanger and was the recipient of Concerts Norway's "Young Soloist of the Year" award in 1999. In the international press he is described as an outstanding lieder pianist.

His album of sonatas of Scarlatti and Mendelssohn is testimony to his exquisite sense of style and sound. His previous release on the LAWO Classics label, "Rachmaninoff/Shostakovich: Cello Sonatas" (LWC1131) with cellist Audun Sandvik, received glowing reviews in Norway and abroad.

The Norwegian Radio Orchestra accompanies Bjelland on this fantastic recording of Chopin's Piano Concerto No 1 coupled with Schumann's Introduction and Allegro appassionato.

Conductor, composer and pianist, Christian Eggen is one of the most influential personalities on the Norwegian music scene, ranging from contemporary music via genre-merging projects, installations, television and radio drama productions to film, theatre, jazz, opera and classical music.

As a conductor, he is known as one of Europe's finest interpreters of contemporary music and has worked closely with composers such as Morton Feldman, John Cage and Helmut Lachenmann.