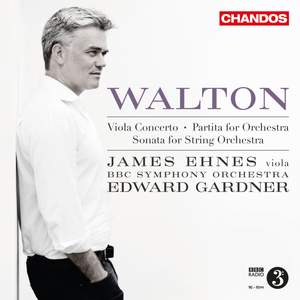 Ehnes, long established as one of the world’s leading violinists, doesn’t offer the same hefty, almost cello-like weight of tone on the viola as some of his specialist colleagues. Then again,... — BBC Music Magazine, July 2018, 4 out of 5 stars More…

The conductor talks to David about the latest instalment in his series of Walton recordings on Chandos - featuring James Ehnes setting aside his violin in favour of the viola for Walton's Viola Concerto.

In this third volume of Edward Gardner’s Walton series with the BBC Symphony Orchestra, James Ehnes leaves his violin to tackle the taxing soloist role in the Viola Concerto. In a recent Strad interview, Ehnes confesses: ‘This is a piece I have loved since I was a teenager, so it is wonderful that the opportunity has come my way to record it... With Walton’s Viola Concerto, none of the writing is impossible but a lot of it is close. And in a way that is exactly where you want it to be: on the edge of technical limitations. There’s a tremendous amount of excitement in that.’ This album in surround sound also features two much later works: the 1957 Partita for Orchestra and the Sonata for String Orchestra, adapted in 1971 from the String Quartet in A minor of 1945 – 47. There is a striking contrast between the uncomfortable modernism of the up-and-coming young composer’s Viola Concerto and the relaxed brilliance of the mature Partita. But the Sonata shows Walton late in his life re-engaging as an arranger with his earlier manner, and so with the characteristic vein of restless unease that runs through most of his output.

Ehnes, long established as one of the world’s leading violinists, doesn’t offer the same hefty, almost cello-like weight of tone on the viola as some of his specialist colleagues. Then again, the solo part in Walton’s Concerto doesn’t at all presuppose this quality…Gardner and the BBC Symphony Orchestra contribute a brilliant and ultra-accurate accompaniment.

Ehnes and Gardner take us back to pre-Menuhin tempos, only a fraction slower than William Primrose’s pioneering 1946 recording. There’s a grand sweep to the performance which is wholly engaging in its refusal to wallow. Ehnes’s burnished viola tone is noble and warm...Gardner conducts a lithe performance of the Sonata for string orchestra…and a suitably boisterous Partita to fill out the disc.

[Ehnes] eloquently masters the bittersweet wistfulness of the outer movements and the dazzling pyrotechnics we hear here...Gardner’s BBC Symphony Orchestra forces play [the Partita] as the showpiece it is, revelling in its unfashionable Italianate lyricism and witty high jinks.