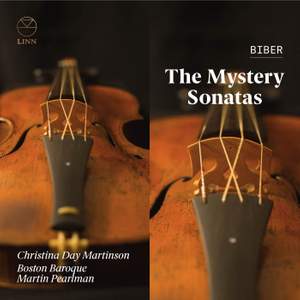 Martinson even prefaces each sonata by sounding the open strings – well intentioned no doubt, though perhaps ultimately a little intrusive…A pity because didacticism couldn’t be further from... — BBC Music Magazine, August 2018, 4 out of 5 stars/5 out of 5 stars More…

Biber: Sonata I in D Minor ‘The Annunciation’: Praeludium – Aria and 2 Variations – Finale

Biber: Sonata IV in D Minor ‘The Presentation of Jesus in the Temple’: Ciacona with 12 Variations

Biber: Sonata V in A Major ‘The Finding of Jesus in the Temple’: Praeludium – Allamanda – Gigue – Sarabande and double

Biber: Sonata VI in C Minor ‘The Agony in the Garden’: Lamento

Biber: Sonata VII in F Major ‘The Scourging of Jesus’: Allamanda and Variation – Sarabanda and 3 Variations

Biber: Sonata IX in A Minor ‘The Carrying of the Cross’: Sonata – Courente and 2 doubles – Final

Biber: Sonata XV in C Major ‘The Coronation of the Virgin’: Sonata – Aria with 3 doubles – Canzona – Sarabanda and double

The adventurous use of six baroque violins in fifteen different tunings creates otherworldly soundscapes that result in a deeply moving and glorious listening experience.

This highly disorientating practice reaches its pinnacle in Sonata XI (The Resurrection) where the middle two strings are crossed over each other both in the peg box and behind the bridge, so that one can literally see a cross on the violin.

Martinson even prefaces each sonata by sounding the open strings – well intentioned no doubt, though perhaps ultimately a little intrusive…A pity because didacticism couldn’t be further from her gutsy, committed playing, spurred on by the richly varied continuo of Boston Baroque which includes thrumming guitar to speed the Virgin’s Assumption into heaven.