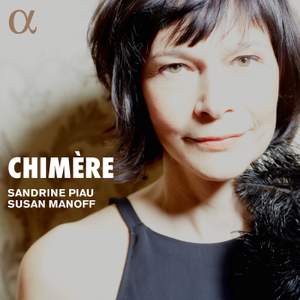 Baksa: Heart! We will forget him

I. As Imperceptibly as Grief

II. Will There Really Be a Morning?

After a number of appearances in Alpha productions (notably as a sublime Alcina in the DVD conducted by Christophe Rousset and staged by Pierre Audi at La Monnaie), Sandrine Piau now joins the label for several recordings. With Chimère, she invites us on a voyage into the intimate and infinite territory of dreams. ‘Chimera: an illusory, unsatisfied quest, the graveyard of our illusions...’ She and her long standing partner, the pianist Susan Manoff, have thought up a programme combining the German lied (Hugo Wolf, one of Schumann’s Mignon songs, a scene from Goethe’s Faust by Carl Loewe), Mélodies by Debussy and Poulenc (his Banalités), and Art Songs by Barber along with discoveries of more rarely heard composers like Ivor Gurney and the Dickinson Songs of André Previn – the celebrated American conductor is less well-known for his compositions, which include this magnificent cycle written for Renée Fleming. Equally at home in French, German and English, Sandrine Piau is at the peak of her artistry. Fantoches, Clair de Lune, Solitary Hotel, Will there really be a morning?: set out for the world of dreams following this unique poetic itinerary. ‘The land of chimeras is the only one in this world worth living in’ (Jean-Jacques Rousseau).

The persistent ‘Baroque specialist’ label hardly sums up this distinguished French soprano. With her distinctively radiant, secure tone and cut-crystal upper range, her repertoire has always been much wider.

The repertoire is eclectic and, also as before, Susan Manoff offers supremely sensitive and subtle piano-playing to complement singing of intense beauty: beguilingly gentle of timbre, Piau’s is a voice that can bloom sensuously at the top, and which she controls exquisitely...this is one of the most fascinating, satisfying and moving recital discs to have come my way for some time. It’s beautifully recorded too.

It's unfailingly beautiful, but without ever lapsing into blandness: Piau’s light soprano is as fresh and pure as when she burst onto the scene in the mid-1990s, and she’s especially captivating in the mercurial Wolf settings and the indolent languor of Poulenc’s Hôtel.

An appreciative nod to soprano Sandrine Piau and pianist Susan Manoff, whose recital Chimère, is an exploration, through song, of dreams. I give Piau and Manoff equal billing, as this is more than a soprano and her accompanist. Their contributions are matched, even down to the interesting CD booklet. Piau provides a delicate tone that belies a certain tensile strength, and Manoff’s playing brings out colours and textures beyond mere support. Their programme, ranging from Schumann through Debussy to Previn, is judiciously chosen and beautifully executed.