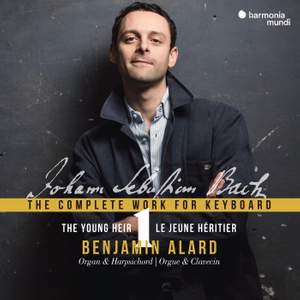 Bach’s youth was a vast field of observation. From the years of apprenticeship in Ohrdruf, where his precocious artistic sensibility was dazzlingly demonstrated, to his first major post as organist at Arnstadt, Bach constantly enriched his musical culture, underpinned by a strong family tradition and driven by iconic respect for the old masters, crucial affinities and unfailing curiosity. As the prelude to a complete recording of a new kind, the eloquence and vigilant intelligence of the admirable Benjamin Alard’s playing are the ideal medium to reveal the technical mastery of Bach’s early keyboard works and convey the essence of this young composer’s musical discourse at a time when he was already measuring himself against the yardstick of predecessors and contemporaries alike.

The magnificent Silbermann organ in St Aurélie’s Strasbourg, and a ravishingly-toned hybrid harpsichord after Ruckers and Duloken, furnish exemplary tools for the job, and Alard’s playing bears down on the music with exacting clarity and focus…Alard’s tantalising journey is off to an auspicious start.

Alard is equally accomplished on both the organ and the harpsichord and moves from one to the other with facility…Alard’s playing is a delight, clean and sensible, with striking agogic expressive power…This is a project to watch with anticipation.