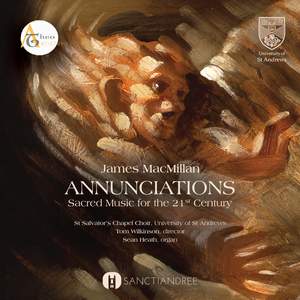 This CD focuses on the Marian tradition and James MacMillan’s ongoing relationship with sacred choral music, centred on his deeply held Roman Catholic faith. It makes for an engaging programme,... — Choir & Organ, July 2018, 5 out of 5 stars More…

De Grande: Whilst Falling Asleep, Savta Told Me Of Jacob

Beatch: The Annunciation Of Solomon

MacMillan: And Lo, The Angel Of The Lord Came Upon Them

'Annunciations' celebrates Sir James MacMillan's ongoing contributions to sacred music, performed by St Salvator's Chapel Choir. Alongside five of his own pieces, the album includes works by two decisive influences on MacMillan, Benjamin Britten and Kenneth Leighton; two significant contemporaries, John Tavener and Judith Bingham; and six next generation composers mentored by Sir James on the TheoArtistry Composers' Scheme, a collaboration between ITIA (the Institute for Theology, Imagination and the Arts), the Music Centre, and St Salvator's Chapel Choir, in the University of St Andrews.

Through music of fascinating and sublime beauty, this recording takes the listener on a musical journey through salvation history, exploring moments in the Old and New Testaments when God speaks to humankind. At the heart of the recording are six new settings of 'annunciations' in the Hebrew Bible. These are framed by moments of divine communication in the New Testament as well as settings of the annunciation: the angel Gabriel announcing to the virgin Mary that she will give birth to the Messiah.

St Salvator's Chapel Choir is committed to the performance of new music, and regularly commissions and performs works for both liturgical and secular contexts. The Sanctiandree label has already garnered acclaim for releases including Salvator Mundi, charting 100 years of English church music after Purcell, Ca' the Yowes, featuring British folk song arrangements, and Bach and the Stile Antico.

This CD focuses on the Marian tradition and James MacMillan’s ongoing relationship with sacred choral music, centred on his deeply held Roman Catholic faith. It makes for an engaging programme, which is superbly delivered by director Tom Wilkinson and his youthful St Andrews’ forces. The 30 voices of St Salvator’s Chapel Choir make a bright, well focused sound that is nicely blended; only occasionally are there signs that they are stretched by the programme’s demands. TheoArtistry are to be congratulated for the enterprise: how often do emerging composers have the opportunity to have their new pieces performed and recorded? All six new works were written in 2017; each is of interest, but I particularly enjoyed Kerensa Briggs’s Exodus III and Sean Doherty’s God Calls Samuel.