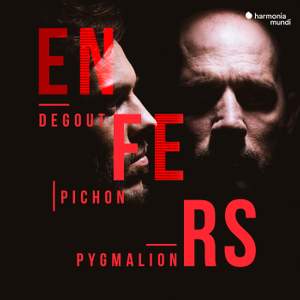 [Degout] possesses the rare facility to mix raw muscle with the subtlest caresses…In the infernal symphonies that pepper Enfers, the band attacks the score with an almost fiendish ferocity…Don’t... — BBC Music Magazine, June 2018, 5 out of 5 stars More…

Raphaël Pichon has invited Stéphane Degout to make his recording debut for harmonia mundi in a multifaceted exploration of the Underworld. The French baritone reincarnates the figure of Henri Larrivée, the famous tragedian of Rameau and Gluck. Around a reconstruction of an imaginary Mass of the Dead, sacred and secular merge, revealing some of the most extraordinary pieces from the operatic repertory of the Enlightenment. Music of death and mourning on an epic scale that inspires Pygmalion to overwhelming heights of pathos.

Raphaël Pichon began his musical training at the Maîtrise des Petits Chanteurs de Versailles and went on to study singing, the violin and the piano at the Paris Conservatoires (CRR, CNSMDP). As a young countertenor he sang under the direction of Jordi Savall, Gustav Leonhardt, Ton Koopman, and Geoffroy Jourdain with whom he performed contemporary works. In 2006 he founded the ensemble Pygmalion, which combines a choir and a period instrument orchestra. The ensemble’s repertoire is nurtured by the filiations that link Bach to Mendelssohn, Schütz to Brahms, and Rameau to Gluck and Berlioz. Along with this group – now an associate ensemble at the Opéra de Bordeaux – he is invited to appear at leading festivals, where he has attracted attention with his interpretations of the sacred music of Bach and the tragédies lyriques of Rameau.

[Degout] possesses the rare facility to mix raw muscle with the subtlest caresses…In the infernal symphonies that pepper Enfers, the band attacks the score with an almost fiendish ferocity…Don’t miss this rollercoaster ride through the underworld!

Degout rises splendidly to the climax of ‘Monstre affreux’ from Dardanus...The Pygmalion chorus comes into its own in sections of the Requiem...Forget the ‘end of time’ conceit and marvel at the music, so winningly performed by Pygmalion and Raphaël Pichon.

Degout [is] evidently in his prime and in terrifically commanding form throughout…The disc contains 78’ 27’’ of simply wonderful music performed, almost all of it, to the day’s highest standards. I had some doubts about Pichon’s tendency to melodramatize the already dramatic, and to make fast very fast; but overall the orchestral playing and the singing both solo and choral emerge with refinement, exactness of delivery vocal and instrumental, and mastery of period style

This terrific road to hell is paved with more than mere good intentions: Degout is a born tragedien, stirring up pity and terror in every phrase and singing with the same sonorous authority and immediacy that made his Chorèbe on John Nelsons’s recent Les Troyens such a resounding triumph. Rameau and Gluck both sound startlingly modern in the hands of Pichon and his musicians, shot through with anticipations of Berlioz and even Wagner.

It is Degout’s superb account of Oreste’s “nightmare” sequence from Iphigénie en Tauride, where the Furies invoke a vision of his murdered mother, that makes this a collectors’ item...It is diabolically excellent.