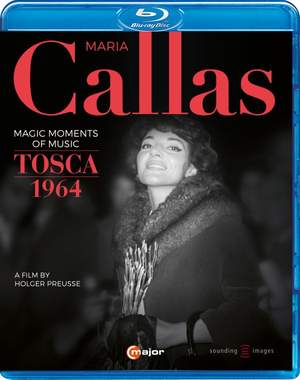 Pappano says illuminating things about Callas’s voice and what she did with it…Kristine Opolais is interesting about her acting…Tito Gobbi is his expansive self…The performance itself remains... — BBC Music Magazine, June 2018, 4 out of 5 stars More…

This film tells the story of one of the most magic moments in operatic history; the beginning of 1964 held a great surprise for the musical world: Maria Callas returned to the opera stage as prima donna. Her Tosca at the Royal Opera House became a sensation. Not even the Beatles received more press coverage. All this, for an artist whose glorious career was said to be over, with the singer herself passing over to legend. However, it was no longer her performances, but her scandals that were dominating the headlines. Unlucky in love with her billionaire boyfriend Aristotle Onassis, Maria Callas wanted to show the world that the title of ‘Primadonna assoluta’ was still rightfully hers. On condition that famed stage director Franco Zeffirelli took on the production, the exceptional vocalist was prepared to take on the role of Tosca once more. Her fans queued outside the Royal Opera House in London’s Covent Garden for four, even five nights to get their hands on a sought after ticket; they spent the freezing winter nights in sleeping bags and on fold up chairs. The film tells the story of the event from today’s perspective and features interviews with Antonio Pappano, Rolando Villazón, Rufus Wainwright, Thomas Hampson, Anna Prohaska Wolfgang Joop, Jürgen Kesting, Brian McMaster, and Kristine Opolais. As bonus the performance of Tosca´s second act is included. It is one of the most dramatic acts in opera history. The film recording is one of the few opportunities to see Maria Callas on stage and witness her emotional dramatics and vocal competence.

Pappano says illuminating things about Callas’s voice and what she did with it…Kristine Opolais is interesting about her acting…Tito Gobbi is his expansive self…The performance itself remains miraculous, however often you see it, Callas in a class of her own for intensity and depth.