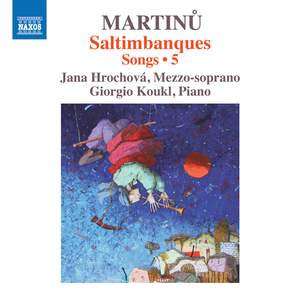 No. 1, Ponies on the Fallow Field

Martinů: Talk to me further, H66

Bohuslav Martinu honed his songwriting craft in between composing larger orchestral works, his yearning for home reflected in the Four Songs to Czech Folk Texts written during desperate times in the Second World War. Sourced from previously unpublished manuscripts, this unique programme presents world premiere recordings of earlier songs written during summer holidays in Policka, as well as the Three Songs after Poems by Guillaume Apollinaire, long thought to be lost but miraculously unearthed just weeks before this recording. Pianist Giorgio Koukl regards these songs as similar to pearls, ‘born out of hardship, pain and discomfort and, after a while, becoming precious and admired’.