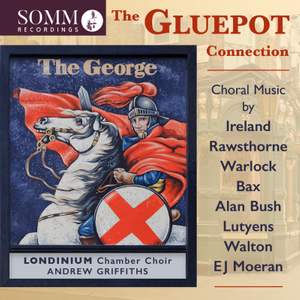 Tenuous links to alcohol apart, there is some fine music-making on this disc. A rapt performance of Peter Warlock’s The Full Heart opens it, the discomfiting harmonies and eerie suspensions... — BBC Music Magazine, June 2018, 4 out of 5 stars More…

4 Seasonal Songs: No. 4, Now the Lusty Spring Is Seen

Bax: I sing of a maiden that is makeless

Songs of Springtime: No. 1, Under the Greenwood Tree

Songs of Springtime: No. 2, The River-God's Song

Songs of Springtime: No. 3, Spring, the Sweet Spring

Songs of Springtime: No. 4, Love Is a Sickness

Songs of Springtime: No. 5, Sigh No More, Ladies

Songs of Springtime: No. 6, Good Wine

Songs of Springtime: No. 7, To Daffodils

The Gluepot Connection celebrates the coming together of a generation of established and emerging composers who defined British music in the middle of the last century (and beyond) in a cornerstone of British life – the local pub. 'That bloody Gluepot' was the nickname given to The George public house in central London by Sir Henry Wood, exasperated that its proximity to the legendary Queen's Hall proved irresistible to his musicians. It also served as the watering hole for a coterie of composers whose wide-ranging influence rivalled that of their literary counterparts, the fabled Bloomsbury Set. Andrew Griffiths skilfully joins the dots of the Gluepot's tangled relationships and musical achievements with the Londinium chamber choir to present a vivid portrait of a moment unique in British music.

Tenuous links to alcohol apart, there is some fine music-making on this disc. A rapt performance of Peter Warlock’s The Full Heart opens it, the discomfiting harmonies and eerie suspensions evocatively registered by the 40 singers of the Londinium Chamber Choir.

The Londinium Chamber Choir are a non- professional group; under Griffiths they are a force to be reckoned with, with even tone, impeccable intonation and a lively, yet nicely rounded, sound.