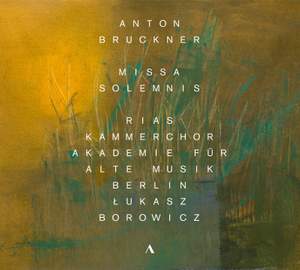 A fascinating glimpse of another side to the composer which is made all the more intriguing in these exemplary performances. — MusicWeb International, December 2018 More…

Anyone familiar with Bruckner, his symphonic architectures reaching for the stars as well as his later Missas from the 1860s, may well be amazed at how deep his Missa Solemnis is still rooted in the solid tradition of Viennese Classicism. In this recording, this rarely heard and recently re-edited and newly published gem is put into the context of the inauguration service of collegiate provost Friedrich Mayr on 14 September 1854 in St. Florian, for which it was written. It is interspersed with the original Proper settings by Robert Führer, Joseph Eybler, and Johann Baptist Gänsbacher. Recorded at the Konzerthaus Berlin in June 2017. A co-produktion with Deutschlandfunk Kultur.

A fascinating glimpse of another side to the composer which is made all the more intriguing in these exemplary performances.

The Arts Desk 19th May

The Tantum Ergo and Magnificat in B-flat recall Schubert, the music's lightness and transparency enhanced by the performances: the Akademie für Alte Musik Berlin’s period sensibilities the perfect foil for a lithe RIAS Kammerchor under Łukasz Borowicz. The three rarer items fit into the sequence nicely, with Gänsbacher’s breezily affirmative Te Deum a highlight.