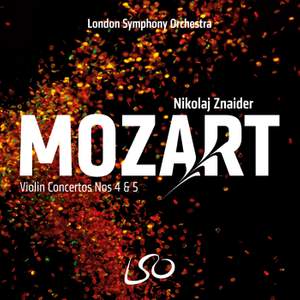 Znaider’s lovely tone and delicacy of touch are a pleasure, and the LSO, taught by Colin Davis to play as chamber musicians, support him faithfully. — Sunday Times, 25th March 2018 More…

The violinist talks to Katherine about his recent recording of the Mozart concertos with the London Symphony Orchestra, and his role as president of the Carl Nielsen International Competition, which is currently in full swing in Denmark.

Nikolaj Znaider performs at the highest level as both conductor and virtuoso violin soloist, and for this album, the first of two releases exploring all five Mozart violin concertos, he directed the London Symphony Orchestra from his instrument, the ‘Kreisler’ Guarnerius ‘del Gesu’ 1741.

Whilst Mozart’s five violin concertos were all written when he was a teenager, there is no denying that the young composer’s growth in confidence and maturity is audible. A step up from his Third, Mozart’s Fourth violin concerto allows the instrument to take the lead, his orchestra providing a supporting role. Widely considered the most ‘grown up’ of his violin concertos, Mozart’s Fifth finishes with a spirited rondo, its solo’s leaping notes and exotic ornamentation leading to its nickname, ‘Turkish.’

Speaking of his admiration for these works, Znaider said: ‘For me Mozart is the greatest composer, because he was able to express everything that Mahler was able to express in one hour and twenty minutes, that Wagner could do in five hours, Bruckner in seventy-two minutes, in twenty-three, twenty-four minutes. He could express the yearning and the desire and the pain of human existence and yet it felt so easy.’

Znaider’s lovely tone and delicacy of touch are a pleasure, and the LSO, taught by Colin Davis to play as chamber musicians, support him faithfully.

There is a compelling freshness to the outer movements, and both first movements include splendid cadenzas. A chamber music aura permeates the whole, along with a palpable joy to the music-making. Although captured live, technically these are highly polished accounts. Znaider and his players nail the characterful end to the Fifth perfectly. The recording is involving.