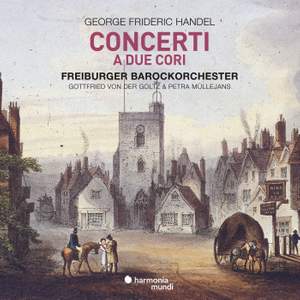 Offer, Handel: Concerti a Due Cori

Handel’s focus in his three Concerti a due cori was on lively rhythms, arresting dialogue and vibrant colours, so his slow movements take something of a back seat, except here where he returned to Esther for a long, lilting siciliana in which the reedy oboes add a poignant edge to the movement’s lingering minor-key melancholy. This prepares the way perfectly for the finest movement of the work, which proudly revives a ground bass Handel had first used in his Birthday Ode for Queen Anne in 1713. Here, its pounding theme – typical of the early Venetian concerto – is taken up by all the strings in unison, frequently as a foil to the contrasting ideas proffered by the wind and brass. It’s hard not to sense in the complete transformation of the original, now amplified with idiomatic horn parts and rich concerto textures, Handel’s rekindled enthusiasm for the music he had first penned over three decades before. In the final movement two oboes are singled out for a virtuoso conversation, while the orchestra relies on the sturdy pillars of a chorus from the Occasional Oratorio.

Divided into two large groups, the Freiburg period players relish the distinctive sounds of their instruments, with particularly strongly flavoured oboes and proud horns. The vital overall sound and use of sonic perspective are undeniably stirring, though at less than 49 minutes the disc might well be thought short measure.

There’s something unique about Handel’s elemental ability to conjure up this magic: a new disc of his Concerti a due cori by the Freiburg Baroque Orchestra bursts with life and reanimates these neglected works...Freiburg’s perky period wind and rasping horns are vivid, while the pounding ground bass from the Birthday Ode for Queen Anne supports endlessly uplifting variations.