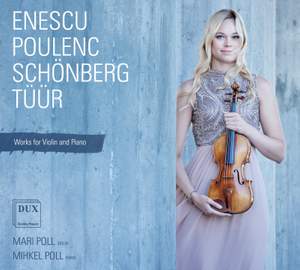 Tüür: Köielkõnd (Walk on the Rope)

The first collaborative CD from sister and brother Mari and Mihkel Poll displays violin music mostly from the first half of the 20th Century, as well as two pieces by Estonian composer Erkki-Sven Tüür, which were written during the latter half. These musical works brilliantly demonstrate how the violin was seen by the composers. The copious glissandi, pizzicatos, harmonics, tremolo, double stops, chords and large leaps in melodies while also retaining a lyrical and melodic essence, exhibit the plentiful and imaginative understanding of the instrument during the time.