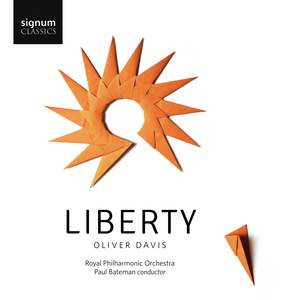 Slick, lyrical and bubbly, Davis’s concert music is a happy extension of his work for TV and film. Bacchus is a joyful pizzicato piece of mischief. — BBC Music Magazine, March 2018, 4 out of 5 stars More…

British composer Oliver Davis’s works have been described as being ‘beautiful’ (The Times) and having ‘pulsating rhythmic energy’ (Classic FM), and has been heard the world over through his frequent collaborations with ballet companies, from Edwaard Liang’s 13th Heaven which premiered in Singapore to Secrets, choreographed by Erico Montes and premiered by The Royal Ballet. In this new recording Liberty, Davis explores works for violin, soprano, strings and orchestra, working with a host of world-leading performers including violinist Kerenza Peacock, soprano Grace Davidson and cellist Katherine Jenkinson, all alongside the Royal Philharmonic Orchestra under the baton of Paul Bateman. Previous albums from Davis have been critically praised, entering in the top 10 in the UK specialist classical charts and becoming disc of the week on Classic FM and the Mail on Sunday and featuring in several ‘Best albums of the year’ listings.

Slick, lyrical and bubbly, Davis’s concert music is a happy extension of his work for TV and film. Bacchus is a joyful pizzicato piece of mischief.

Davis has a keen eye for catchy tunes, dancelike rhythms and pleasant tonal patterns while possessing all the skills of a very gifted orchestrator in managing to blend each element into a coherent whole. But there’s something missing.