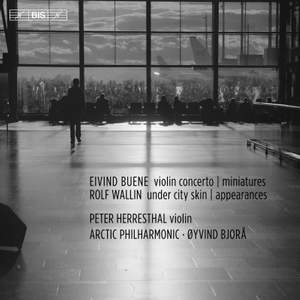 Those who associate Rolf Wallin (b.1957) with abstract poise and geometrical precision may be surprised at the pieces here…The playing of the Arctic Philharmonic under Øyvind Bjorå is sensitivity... — Gramophone Magazine, July 2018 More…

II. The Park at Night

III. Among Voices of the Dead

Following his 2001 disc of works by Arne Nordheim, Norwegian violinist Peter Herresthal and BIS have collaborated on the project ’A String of Releases’ – recordings of contemporary violin concertos, in several cases written especially for Herresthal. Featured composers so far have been Olav Anton Thommessen, Henrik Hellstenius and Ørjan Matre – all from Norway – as well as Thomas Adès and Per Nørgård. Utterly fearless in his approach to these complex works, Herresthal has received recognition for his recordings, earning a Spellemannprisen (the ‘Norwegian Grammy’) as well as being shortlisted for a Gramophone Award.

The present, amply-filled addition to Herresthal’s ‘string’ features the composers Rolf Wallin (b. 1957) and Eivind Buene (b. 1973). Wallin – one of Scandinavia’s leading composers – has for Herresthal made a version of Under City Skin, his 2009 concerto for viola and ensemble. The work is a poetic and sonic journey through an imaginary cityscape, with the solo violin and the string orchestra playing off and with a pre-recorded soundtrack. Buene’s Violin Concerto was also conceived with Herresthal in mind. With suggestive individual titles – Falling Angels, Sound Asleep and Among Voices – its three movements are each scored for a different combination of chamber orchestral forces. They can be played separately, but together they form a haunting triptych of melancholy and memory. Supporting Herresthal in the concertos are the conductor Øyvind Bjorå and musicians from the Arctic Philharmonic, in two different configurations: as a chamber orchestra and a sinfonietta. Bjorå and the Sinfonietta also perform Wallin’s Appearances and Buene’s Miniatures, for 15 and 16 musicians respectively.

Those who associate Rolf Wallin (b.1957) with abstract poise and geometrical precision may be surprised at the pieces here…The playing of the Arctic Philharmonic under Øyvind Bjorå is sensitivity itself but it is Peter Herresthal…that commands attention on this finely recorded and informatively annotated release. Warmly recommended.