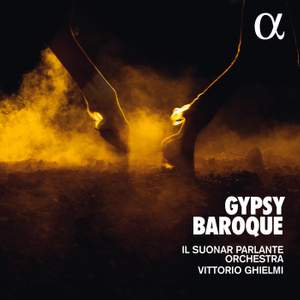 Telemann: Suite, TWV 55:B8: Scaramouche (Arranged for Violin and Cimbalom by Vittorio Ghielmi and Marcel Comendant)

anon.: Hanac (Arranged for Recorder and Cimbalom by Vittorio Ghielmi and Graciela Gibelli)

Vittorio Ghielmi, one of today’s most admired viola da gamba soloists, comes from a family of musicians (his brother founded Il Giardino Armonico with Giovanni Antonini). In parallel with his erudite and virtuoso readings of Marais or Graun, Vittorio Ghielmi is an artist who enjoys crossing borders. With his ensemble, Il Suonar Parlante, he seeks new musical languages and collaborates with leading figures of jazz (Uri Caine) and the masters of traditional music (Khaled Arman, Dhruba Ghosh).With Gypsy Baroque, he and his gypsy friends present a dazzling album bubbling over with life. He has gone to Transylvania in search of the gypsy music of the eighteenth century that was played on the frontiers of the Ottoman and Austrian Empires – music that influenced composers like Mozart and Haydn for their famous ‘Janissary’ pieces. For this recording, he places these gypsy tunes (only the melody is written) in perspective with orchestrations of the period. The Baroque specialists of his ensemble are joined by longstanding guest artists (the soprano Graciela Gibelli and the recorder player Dorothee Oberlinger) and traditional musicians like the Slovak violinist Stanislav Palúch and Marcel Comendant, a virtuoso exponent of the cimbalom and of improvisation. Going beyond the ‘documentary’ aspect, already fascinating, here is a genuine musical recreation!