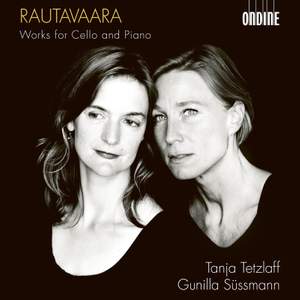 I. On the Name Einar Englund

The passing of Einojuhani Rautavaara in 2016, one of the most performed Finnish composers after Sibelius, left a deep void in the field of Finnish contemporary music. This new album by cellist Tanja Tetzlaff and pianist Gunilla Süssmann includes Rautavaara’s rarely heard works written for cello and piano. This album showcases Rautavaara’s skill in writing music for these two instruments and gives an opportunity for discovery. Rautavaara’s creation for cello span several decades and highlight the importance of the instrument for Rautavaara’s oeuvre. The cornerstone of Rautavaara’s cello chamber music are the three sonatas. The earliest of the sonatas, a four-movement Sonata for Solo Cello, was written in 1969 and contains Baroque influences. Prior to this, the composer had already written Two Preludes and Fugues for cello and piano in 1955 firmly rooted in the Neo-Classical tradition as a young student. Soon after completing his solo cello sonata, the composer started writing his Neo-Romantic Sonata for Cello and Piano No. 1. However, the work was left unfinished and completed almost 30 years later, in 2001. Cello Sonata No. 2, completed in 1991, is much different in style, more modern and edgy, but based on a work written for a cello music competition in 1975. Polska (1977) for two cellos and piano is based on a folk tune from Rantasalmi. The origin of this work is connected to the genesis of Rautavaara’s first published opus, Fiddlers (Pelimannit) from the early 1950s. Song of My Heart (Sydämeni laulu) is the composer’s transcription from an aria included in his opera Aleksis Kivi (1995–96). In 2000, Rautavaara arranged the piece for cello, and fittingly for this funereal piece dedicated it to the memory of Estonian composer Lepo Sumera.